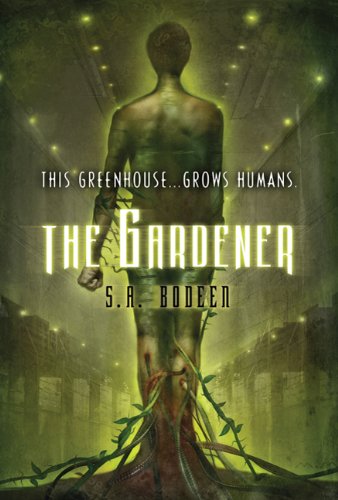 Mason has never known his father, but longs to. All he has of him is a DVD of a man whose face is never seen, reading a children’s book. One day, on a whim, he plays the DVD for a group of comatose teens at the nursing home where his mother works. One of them, a beautiful girl, responds. Mason learns she is part of a horrible experiment intended to render teenagers into autotrophs—genetically engineered, self-sustaining life-forms who don’t need food or water to survive. And before he knows it, Mason is on the run with the girl, and wanted, dead or alive, by the mysterious mastermind of this gruesome plan, who is simply called the Gardener.

Will Mason be forced to destroy the thing he’s longed for most?
From goodreads.com

I will admit, the main reason I picked up this book was because I loved S.A. Bodeen's The Compound. You can read my review here if you wish. But yes, I picked up The Gardener already in love with S.A. Bodeen's writing style and the ultimate strength and speed of her novels.

So, once beginning, I found it hard to stop reading. Yes, the beginning of this book was a bit slower than the other, but, because I knew the pace at which Bodeen writes, I continued to read. And continuing was not in vain. Once the action began, it didn't let up.

The girl has to be my favorite character in this novel. Mason doesn't know her name, and neither does she, and neither of them know what exactly happened to her, but this mystery surrounds her and the story and quickly develops into something greater, the source of the action.

One thing that I loved in reading The Compound was the ethics issues it addressed. The same sort of things come up in The Gardener. Is it alright to experiment on children from birth if they will be capable of continuing the human race? Not only this, but it questions our own world. How long to we have until our food supply runs out and what are we willing to do about it?

These are the questions at the core of the novel, keeping me reading, making me want to finish the book quickly. One thing I have noticed between both of Bodeen's novel is the issue of family, or, rather, dysfunctional families. Both novels had families that didn't get along completely, or didn't function as a whole.

Again, the characters are real, with real fears and desires, faults and quirks. And the situation is believable, both of which are important to the structure of the story. If there is one thing I can complain about, it is the fast paced ending that happens too quickly to read, which isn't a complaint at all.

As with the first book I read from Bodeen, I loved the epilogue. The way the entire story was wrapped up so seamlessly can only be done by a master and I must agree that Bodeen is one. Great job and I look forward to more.